Elevated work situations are a necessary part of many construction and maintenance projects. Such environments carry a significant potential for significant injury or death from falling, which is why proper fall protection is a critical component of safety programs for those projects.

Unfortunately, proper fall protection and the correct use of personal protective equipment are not always well-understood, creating both a false sense of security and the very real prospect of danger. A worker may believe that he’s safe because he’s wearing a high-quality lanyard and has connected it to part of the structure. However, that’s not always the case.

Personal fall-protection equipment cannot help a worker if it is used improperly, and one of the most common misuses is failing to tie off to a safe anchorage points. Just because something is attached to the structure or is made of a material such as steel does not ensure that it provides a safe anchorage.

OSHA mandates that anchorage points be able to withstand 5,000 pounds of force. When choosing an anchorage point, it’s also important to consider whether more than one worker will be tied to it at the same time, because that will affect the maximum force.

The best way to identify safe anchorage points is to do it before you need them. Before the project begins, identify and mark spots that will provide safe anchorage when needed. Consider the highest possible tie-off locations and where staff will be working in relation to the anchorage points. That way, workers won’t have to guess where they should tie off, and they’re less likely to tie off to a site that can’t safely support them.

Location is just as important

When manufacturers test products such as retractable or shock-absorbing lanyards, they usually do so in a vertical situation. The fall distance is generally determined by measuring from the anchorage point, along the length to which the lanyard will stretch out, plus the length of the body. When computing the fall distance, it’s a good idea to add a safety factor of an additional three feet to allow for problems with the equipment, miscalculating the distance, or an unusually tall worker. The harness should be tight, and freefall distance should be minimized, because this will reduce recoil and stretch, and the forces they place on the body.

Horizontal aspects also need to be considered, because a fall may produce a pendulum effect, in which a suspended worker swings back and forth – sometimes into other workers, the structure, moving equipment, or hot work. That’s why most manufacturers recommend no more than a 30 percent offset from the anchorage point to the body position.

Another situation that sometimes occurs is when a worker will be performing tasks at multiple locations on a roof or open floor area, and chooses a 50-foot retractable lanyard for convenience, believe that once it’s secured, he can move anywhere in that range. However, if he stretches the lanyard out horizontally and falls over the edge, he’ll fall the full distance before the safety clutches can kick in. The ground or another surface may stop him before his protective equipment has the chance. 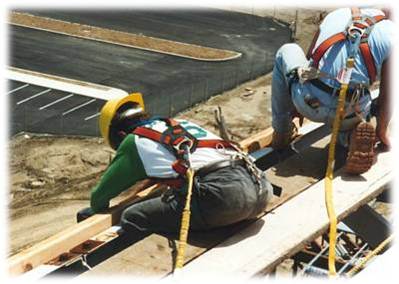 Suppose a worker slips off the edge and his fall protection equipment works flawlessly. He’s safe, right? Not necessarily. If he’s suspended in the air, you’ll generally have less than five minutes to bring him down before he can begin to lose circulation in his legs and even develop blood clots. If the pressure is relieved too quickly, the sudden rush of blood through the circulatory system can lead to other problems.

That’s why it’s so important to develop your own rescue plan for all of the elevated aspects of your project before work begins. The plan should address how you’ll recover workers who are conscious, and what type of equipment on the site – such as vertical lifts, manlifts, or ladders – are available. It should also include training for employees in the area.

If workers don’t know the proper rescue procedures, they may complicate the situation. For example, a worker who reaches down to grab the lanyard and pull his co-worker to safety can easily injure himself, creating a need for two elevated rescues. If the suspended worker is unconscious or has significant injuries, pulling him up may worsen his condition and make it more difficult for the rescue team to provide assistance.

Knowledge is the best protection

Workers who assume that fall protection is as simple as tying off to what looks like a safe anchorage can become complacent about safety, as can supervisors who think things are great as long as everyone has the right equipment. In both cases, they’re wrong. Companies that want to protect workers from falls need to place a high priority on training everyone involved. In addition to proper identification of anchorage points and use of equipment, that training should ensure that everyone knows what to do when a mishap occurs. That knowledge makes the difference between having only a perception of safety and achieving effective protection.